People have been raving about With Jam and Bread. It’s a good title, you have to admit, echoes of the nostalgia of Nigel Slater’s toast. It’s a bright studio space with pops of art and uncomfortable red seats and is a welcome addition to the Lee high Road. 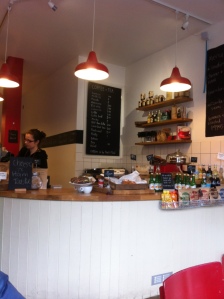 Interior if With Jam and Bread

It is in fact an art gallery coffee shop, with the sort of art I would actually buy as opposed to strange collages that started off with a good corner, but had to make up for the rest with thick confused splodges of paint. Nine out of ten for atmosphere. I think this is why it is is such a favourite.

With jam and bread turned out to be a description of the sandwiches. I did anticipate that my ham salad sandwich would come with bread, but I was taken aback by the oodles of strawberry jam soaking through it.

Ham sandwich with bread… And jam

Actually, this proved a rewarding combination. Afterall, people eat honey roast ham. I could even see it working with goats cheese, egg (maybe I’m getting carried away), but I just would have preferred to know before I ate.

They have the decency to name their coffee source on the chalked up boards. Which tells me that they respect coffee. The 2:20 charge said they respected it a touch more than maybe I did. But the flavour suggested that respect was a distant affair, a conceptual respect for coffee that did not get close to intimacy. (It wasn’t bad, just wasn’t amazing),

The cakes also were so so. Particularly the almond croissant. Croissants are not to be messed with, they should be light, crumbling and crunchy. By no stretch of the imagination should they be squished, stale or made with margarine. Like I said, the almond croissant at With Jam and Bread was so so, possibly on the squished side. The lemon poppy seed was no better. It was a generous slice, but it was kind of stodgy.

The tea, on the other had made up for it all. But not all that respected, appearing on the menu as leaf tea, with no variations led me to expect nothing but English breakfast until I ordered, and a vast array was rattled off. The pot arriving was both sophisticated in look and taste. There’s nothing like pouring endless cups from fresh steaming leaves and thinking, just thinking.

A Review of Moca, coffee shop and deli in Blackheath Standard

I have been neglecting Moca: I visit. I eat at Moca with friends who ask me if this will appear in the blog … and somehow it never does.

Perhaps this is because it took me ages to actually try the coffee. It’s never been a coffee moment when I land there. It feels unjust for a coffee blogger to opine without actually trying the coffee.

Or maybe I just can’t think of anything to say about it. it’s neither ‘out there’ or ‘back here’.

It’s at a sort of at a moderate distance. 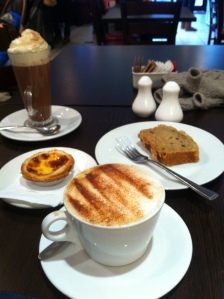 I can provide a brief history of Mocca. Moca replaced Foster’s. It’s easy to tell: it now has a big shiny red banner instead of a run down yellow banner. However more importantly, this change in ownership replaced peculiar little polystyrene cups with some frothy brown and white stuff in with cappuccinos, REAL cappuccinos and lattes. I don’t quite understand why they used to be so bad because the last owners were Italian and did have a propa cappa maka. But I do have the absolute recollection of actually binning a cappuccino from Foster’s one cold morning.

Well, I can assure you all that the change in ownership means that everything has undergone a thorough upgrade, with smart brown seats and semi-deli provisions. I think they even use butter on their sandwiches now. The sandwiches are nice. There are freshly squeezed juices of all mixes on demand and flatbreads with interesting fillings. In fact all of the savoury offerings have proved enjoyable, served by the upbeat staff, albeit in occasionally freezing conditions (because they open the back door to cool down the kitchen). 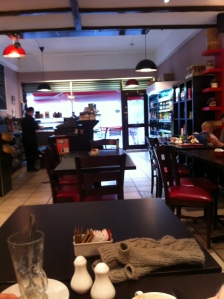 I recently discovered the another reason why I had not reviewed Mocca. Other than the litle bite sized italian sweets, the cakes are nothing special. And cakes are meant to be special, right? Even if you are a Victoria Sponge eater (and I judge you not for your undemanding taste buds) the very name, Victoria (that’s Victoria as in big time monarch of the British empire- wore lots of big dresses) implies special. You don’t want to look at the cake counter and think, yeah well maybe next time. And I do at Mocca. I feel adequately nourished for lunch, and walk away thinking, at least the waistline hasn’t grown.

Mocca Coffee Shop, It replaced Fosters. Easy to tell.
A Review of Moca, coffee shop and deli in Blackheath Standard I have been neglecting Moca: I visit. I eat…